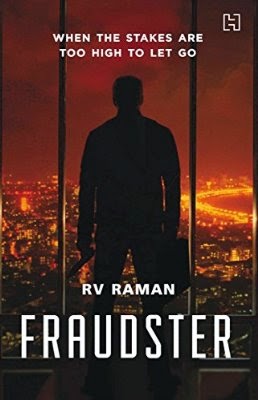 I wanted to read this novel mainly because of its blurb which promised a great corporate thriller. It goes -

Illicit finance, high stakes crime and vicious manipulation come together in this story of corruption, greed and treachery among corporate India's black sheep. Arresting, fast-paced and written by an insider from the corporate world, Fraudster will keep you on your toes till the very end.

The book completely fulfills the first promise but falls slightly short of the second one.


The plot is brilliantly crafted and really takes us deep into the murky world of modern banking and accounting.


The novel begins with a trio of seemingly unrelated deaths and a hacking attempt into the server of one of the biggest accounting firms, following which we find our lead characters trying to make sense of the events by connecting the dots. It is a race between the good guys (Varsha, an employee of the accounting firm and Ranade, the police officer) trying to protect sensitive data and the bad guys who try their damnest to keep the evidence of their fraudulent activities under wrap. Though the plot is intricate, the narrative moves rather simply from one situation to the next without many parallel events or storylines. Towards the end, there are many exciting elements including high speed car chases and kidnappings through which the reader is nudged towards red herrings which keep the reader distracted till the protagonists track down and reveal the real fraudster and killer.


The amazing part about the novel is its interesting plot and how complicated technical aspects are described in a simple manner. The narrative includes complex financial manipulation and tinkering with BlackBerrys as well as Microsoft Exchange Servers.

However, it is not tedious to go through these technical parts as it is all nicely woven into the storyline. The author's expertise with respect to the banking industry is apparent from his descriptions of banks' decision making processes and also from how realistic the story is.


The plot revolves around a scam relating to dubious corporate loans facilitated by corrupt bank practices and officers. When I was reading this novel, the leading news story in financial newspapers was about the arrest of SK Jain, Syndicate Bank CMD and also the role of brokers in bribery for loans scandal! Thus, 'Fraudster' is so realistic that might just be a true story!


Where this novel falters is on its promise to be arresting and fast paced. The novel begins rather slowly and it only picks up pace close to the halfway mark. There aren't any real parallel story lines and only a feeble attempt to show the villains' point of view which seems to have been abandoned after just one chapter. More finicky readers may not stick to it till they reach the point where the story picks up pace.


Furthermore, the characters aren't particularly memorable either. After going through more than 280 pages I cannot remember any of Varsha's traits or description other than her being a karate expert and having tomboyish short hair. Similarly, Ranade, is also a cop who is too simple and straight forward and who gets his way almost always with their being only a passing reference to possibility of political interference with police work right at the end.

The cover of this book though seems to have been heavily influenced by Ravi Subramanium's two previous books, (Bankster and Bankerupt) both of which have a similar cover of a silhouette against the backdrop of a skyline. Though both authors cater to a similar audience, the nearly identical cover (be it intentional or not) seems like a cheap ploy to get the other's readers and does a disservice to Raman's writing which is good enough to sell copies on its own merit.


So though I thoroughly enjoyed the novel, I felt that it had the potential to be much superior. Better characterisation coupled with some cliffhangers and probably some more narration from the villain's point of view would have made this novel perfect!


RK Raman definitely could be the best corporate thriller writer in India and with his banking insights, he might give Ravi Subramanium a run for his money! I hope just like Ravi Subramanium, his novels become better and better. I hope he writes many more thrillers and am already looking forward to his next novel! You can follow him on twitter here.

You can buy 'Fraudster' at a discounted rate on Flipkart.com!


Disclosure : I was supplied with a review copy by Hachette India.
Tweet